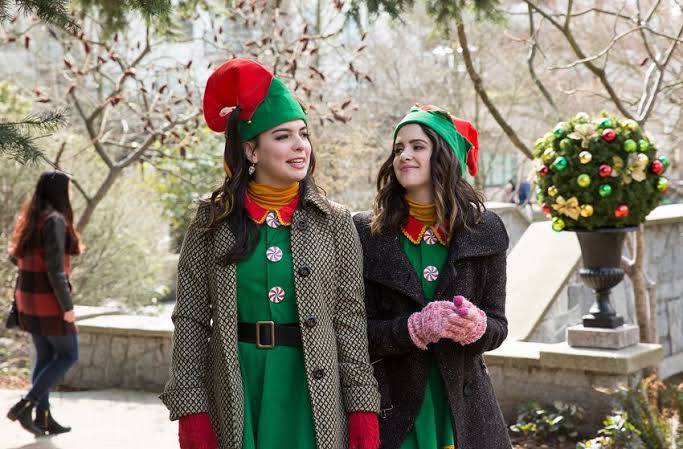 Now, I know what you’re thinking, “another cringy christmas movie…I think I might skip this one.” But I’m here to tell you why you shouldn’t. As someone who is absolutely Christmas obsessed, I have a list of what is now almost 60 Christmas movies I enjoy. No, I do not watch all of them every year…. We all have our must sees we watch every season but, I also like to have others to pick and choose from each year, because as we all know there are only so many times you can watch something before you need a break.

I first heard of A Cinderella Story: Christmas Wish because Gregg Sulkin, an actor I have been a fan of for a decade now, starred in this film. He stars alongside Laura Marano, which most may know from Disney’s Austin and Ally. When I first heard of this movie I have to be honest and say my first reaction was “oh no, now I have to force myself to watch this.” I usually always try to support my favorite actors by watching their projects, as most do. But guess what I watched it and I actually loved it!

Before I give a brief synopsis, I would like to share a something I’ve learned over the years and was reminded of when I watched this movie. Don’t judge the actor from their past characters. To clarify, as an example, I LOVED the show The Secret Life of the American Teenager. But over the years many people have said the acting is terrible. Now, I have no experience with acting so I cannot say if this is true. BUT, I can say if a character was written as annoying, it doesn’t mean that they are a bad actor nor like that way in real life. But since I’m on this Secret Life tangent I would like to briefly state that all the characters are annoying, but that’s a conversation for another day. But, I do believe sometimes actors’ past work can cloud our judgement of someone.

I apologetically say the reason I was so hesitant to watch this movie was because of Laura Marano. I loved Austin and Ally, but sometimes the Ally character was truly annoying and seemed cringe. Now, although obviously aware someone is not their character, I think, as I stated before we are all guilty in letting a fictional character someone played oddly cloud our judgement of someone. And Laura I AM SO SORRY! I think we should all start becoming more aware of when we do this because most of the time we will be surprised at the truth. I thought Laura did an incredible job in this movie! I think any actor that was known for playing a certain role for so long may face the criticism of those who think they can only play a certain character or that they will never be “taken seriously” to do other work. Although her character had her quirks like Ally, you were able to see her in a more serious light as compared to the Disney acting.

A Cinderella Story: Christmas Wish is like all of its sisters, a modern twist on the classic tale, BUT this one is themed around Christmas (I mean these are most definitely obvious from the title). Kat, played by Laura Marano lives with her step family who are as always spoiled brats with no hearts. They make Kat do all the work whilst she is also balancing a job as an Elf at Santa Land when her heart really lies in her song writing. Kat and Santa, who ironically known as Nick, played by Gregg Sulkin,start a flirtatious relationship and he invites her to the most prestigious Christmas party in town. And that is all I will say because I don’t want to give away anything of course, that’s the fun of the movie!  Overall, I absolutely loved this movie. I thought it was fun and cute! If you decide to watch check out my thread below of when I watched for all the fun reactions. And if you still need convincing to watch this movie, if you don’t watch it for anything else…WATCH IT FOR BRUNO THE DOG,STAR OF THE SHOW.

why is it that even in the modern Cinderella’s they make this chick basically a slave. Somebody call CPS#acinderellastorychristmaswish

the evil stepmothers are always terrible but this one in particular bothers me bcuz she hates dogs. HOW COULD U HATE BRUNO THE DOG HE IS THE GOODEST BOI THERE IS#acinderellastorychristmaswish

Ok last tweet BUT I forgot to say, we have to laugh at the first scene hearing “hold my balls!” LMAO #acinderellastorychristmaswish